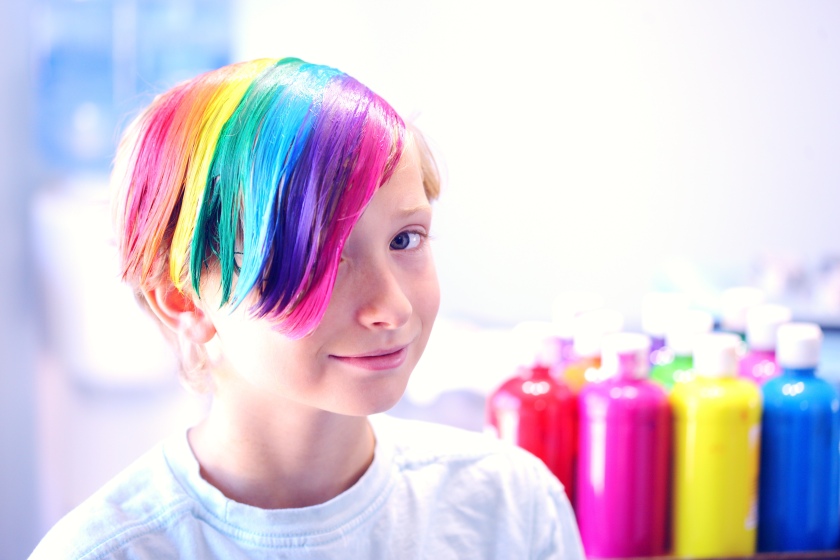 I am a senior lesbian, but gender identity is something I just can’t believe in wholeheartedly. When I hear about kids as young as three going through any type of gender assignment, I wonder what has gotten into their parents .
When I decided to write this blog, I had to look up gender identity to see at what age children start to know about gender. I was shocked to find that the age is 18 to 24 months. I mean, at that age, kids are not expressing themselves and are barely toilet trained. Children’s thought patterns at that age are not developed, so how can they understand gender? Then as they get older, when parents say, “My daughter likes to play with trucks or my son likes to dress up,” I can’t see that translating into “My child isn’t comfortable with his/her gender.” There is no rationale, even if your child stomps around the house protesting to play with toys that their peers are playing with. If a three-year-old boy likes dolls and dressing up in girls’ clothes, that use to be considered normal and something they will grow out of. This is a different time now, where everything is unisex, so how do you know the child isn’t just going through a phase? A young child emulates the people around him/her; therefore, if parents don’t give the child a chance to grow into him/herself, they are pushing their fears and thoughts onto the child. Parents, I’m sure, take the child to doctors and therapists before starting any type of gender change. I’m also sure it’s not an easy thought that your child might not be the right gender, so how can you think the child knows what gender he/she wants to be? This is the same child that is barely using a folk. I can see how an older child, say maybe twelve, may start to feel his/her hormones and have questions about his/her identity. I can see that child as a teenager engaging in bisexuality for a period just to experiment. When I grew up, experimentation was a part of growing up, whereas now it’s a gender identity problem. There is a problem with the problem. The other issue I have with gender identity regarding young children is, what happens when the child grows into an adult and now thinks he/she wants to go back to his/her birth gender? It’s not like the child can just run to the nearest doctor for a reversal. The same confusion they have as young children about gender identity will be the same confusion they will have as an adult about gender. What he/she feels it was a mistake. I have watched Jazz, and I’m not saying that for some kids maybe it is an issue, but not for kids of a very young age. My grandson, who is age five, has long hair and sometimes people mistake him for a girl. If he played with dolls and ran around in my daughter’s skirt with heels daily, I wouldn’t encourage her to think that he has a gender issue and let’s run to get therapy. I just can’t believe that at age five he knows he wants to be a girl. My advice to her would be to let him grow into himself. Kids go through all kinds of phases, and some phases can last a long time. I would encourage her to expose him to both genders of children. I know this is a highly debatable subject, which is understandable because the suicide rate for children has risen. I do love that television is bringing to light gay issues that can give a better understanding of issues young children may encounter. Parents should look at themselves to see if they play any part in gender identity issues with their child. Remember, it all starts with the parents’ shaping their child’s world. That doesn’t mean there aren’t children out there who have gender identity issues. It does mean that maybe, just maybe, you shouldn’t be so quick to put a label on your child at such a young age.